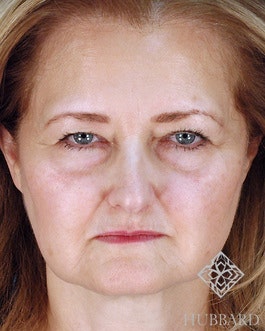 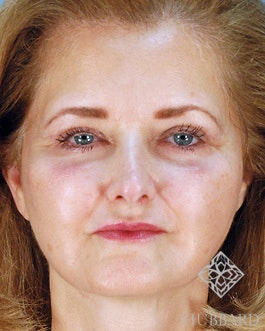 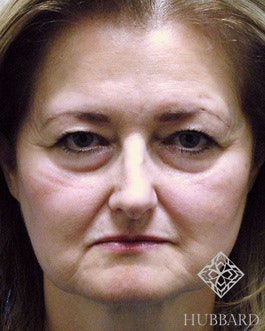 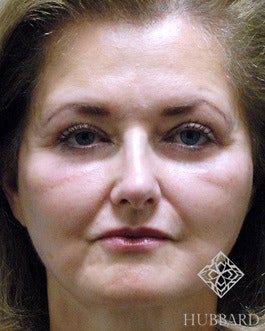 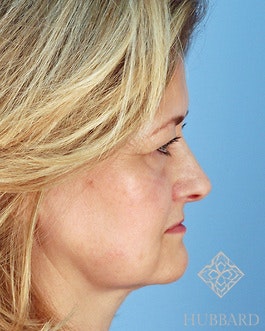 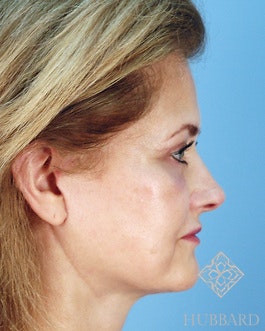 This 56 year old woman wished to rejuvenate her facial appearance especially around her eyes and cheeks. During her consultation with Dr. Hubbard she expressed concerns about the dark circles under her eyes, the heaviness of her eyelids and the sagging skin around her jaw. Dr. Hubbard suggested a facelift to treat the lower portion of her face and also an eyelid lift. During this surgery, there were some subtle changes that she wanted done with her nose and these minor rhinoplasty procedures were performed at the same time. After a smooth recovery, she returned for after photos to show her natural, rested look. Not immediately obvious, but important for her rejuvenation, was the use of her own fat as filler for the hollows beneath her eyes, the cheek and the sides of the nose and mouth. Further, fat was used to refine the contours of the lip with some very subtle plumping. Fat was also used to plump under some fine lines. The results from the fat grafting can be seen most clearly in the photos labeled "without flash". When we do not use a flash to take a picture, facial shadows are more prominent, making it easier to see the change in the 3-dimensional contours of her face. Her surgery left her with a very natural rested look having augmented all her inherent beautiful facial features that were somewhat hidden with aging changes.