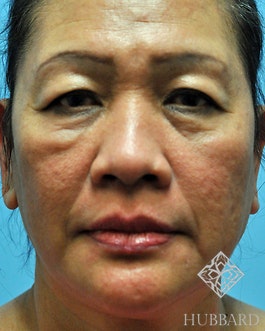 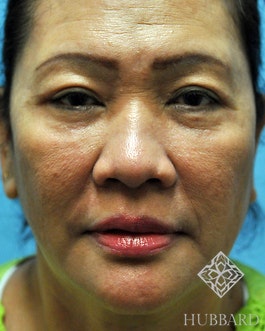 Aging of the face manifests in 3 ways: 1) sagging, 2) wrinkling, and 3) gaunting. Gaunting is a sinking of the skin due to natural fat loss in certain areas as we age, such as beneath the eyes. A facelift helps sag, but does not improve the shadows cast by sunken areas. In some patients, for the first few months after facelift, swelling fills in some of these sunken areas, temporarily producing the effect normally achieved through fat injections. However, that swelling always goes away, leaving only the lifting effect of the facelift. Long term, the vast majority of patients will get a better overall result with fat injections done at the same time as the facelift. Occasionally, an individual does not need the lift of a facelift, but only fat injections. This woman chose to include fat injections with her facelift. Looking at the before picture, I have labeled the areas chosen to inject: A) the “dark circle” area beneath the eye, B) the sunken cheek area, and C) the nasolabial fold. Consistent lighting in before and after pictures is very important to demonstrate the result. We can clearly see the benefit in the after picture, almost a year later. Volume has been added to her face to create a very natural, more youthful appearance.